Doha to Amman: Why was the man in 8G so very nervous?

Does anyone remember the episode of the Simpsons when they need witness protection to save them from Sideshow Bob? Then he wears a T-shirt with “Witness Relocation Program” and a cap emblazoned with “WRP” wherever he goes?

I was reminded of this yesterday on my flight from Doha, Qatar to Amman, Jordan.

To set the scene, I’m not a nervous flyer, ever. I enjoy the turbulence and even find it helps me sleep.

We were scheduled on a flight on Royal Jordanian airlines from Doha to Jordan. There’s plenty of conflict and unrest nearby here but these are both peaceful places. Doha has a superb airport and RJ is, far as I know, a reputable airline.

We were seated in the second row in economy (remember, I run a free website!). Everyone’s already on board and they’re not far from closing the doors when one last guy comes onto the plane and sits next to me, across the aisle.

Enough to make me start watching him while trying to look like I wasn’t watching, covertly pretending to read my Royal Wings mag (don’t bother if you’re ever on RJ) while looking sideways.

He doesn’t do up his seatbelt but he keeps fidgeting with it, constantly pulling the clasp down then sliding it back along the belt. Slide-clack-slide-clack. Constantly.

He has a small backpack which he puts on the floor beneath his feet, then picks up, then puts back, then picks up again. He won't let it go. No other luggage.

It’s hot, but this guy is wearing a sleeveless winter jacket. Zipped up all the way. He’s sweating. He’s looking around.

He puts his seat back immediately, then seems to remember that you can’t do that so he straightens it up again, then puts it back again anyway.

And, all the while, he’s constantly playing with his seatbelt clasp.

I look across at Kathy and her eyes are wide like a beaver: “THE GUY NEXT TO YOU!!!” (whispered, but I’m adding capitals for emphasis.)

They’re doing the safety demonstration and I realise with the “If you see something, say something” campaigns that I have to do something. I’ve flown hundreds of flights and NEVER seen someone behave like this.

We’re already taxiing and the safety demonstration is going on. Two languages of course. I’m trying to attract the attention of the stewardess unsuccessfully.

I realise I don't have much time.

The demonstration concludes and she walks toward me.

I motion her over, close and I whisper:

“The guy seated next to me in 8G. He’s behaving erratically. He’s very nervous. He’s fidgeting continuously. He has a winter jacket on, zipped, and it’s hot in here. He’s sweating. He’s concerned about his backpack and he has no other luggage.”

She looks up at me, then looks past my wife to the older gent in 8A, soundly asleep, dribbling in his lap.

She looks over, SMILES, then leans back to me and whispers “One moment”.

Why did she smile? It looked like a "oh, that's cute, you're a nervous flyer" type of smile.

Am I really being overly cautious?

I look back to 8G. Slide-clack-slide-clack.

It's not just me. Surely. This IS weird.

She walks up a few seats and calls over her supervisor. They talk for about a minute, closely.

The stewardess comes back, leans in to me closely and whispers:

I tell Kathy. She’s as disbelieving as me. “He has to work on his subterfuge!”

First day on the job? Long shift and a bit hyped up on too much caffeine or something stronger? Maybe just not cut out for that profession?

Sure, his disguise was pretty good.

There’s no way he looked like a sky marshal because he looked EXACTLY LIKE WHAT HE WAS TRYING TO PROTECT US FROM! 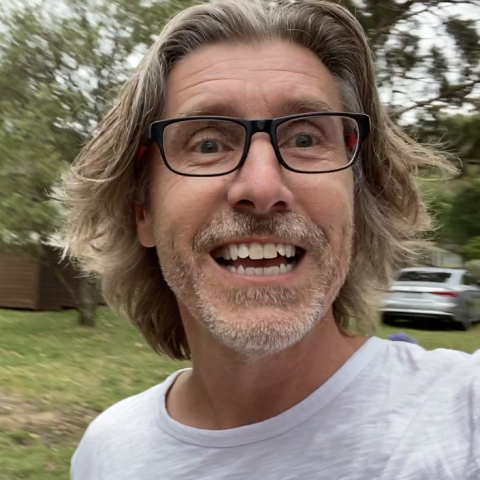